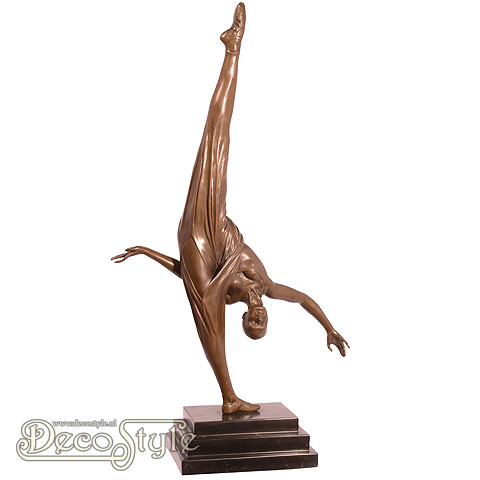 Bronze sculpture of a female contortionist or snake woman on a marble base.

Isidore Jules Bonheur was born in Bordeaux, 15 May 1827 and died 10 November 1901 in Paris. He is best known as a very distinguished French sculptor of animals of the 19th century. he had an elder sister, Rosa Bonheur, with whom he began his artist career, working in their fathers studio. His father was Oscar-Raymond Bonheur, who was a painter and a member of Saint-Simonianism, a Christian-socialist organisation that promoted the education of women alongside men. His mother was the musician Christine Dorotheé Sophie Marquis.
In 1828 the whole family Bonheur moved to Paris
Isidore Jules Bonheur started working as a painter and made his Salon debut in 1848 and started studying in 1849 at the École nationale supérieure des Beaux-Arts. He exhibited regularly until 1899 and won medals in 1859, 1865, 1869 at several expositions all arround Europe.
He gave up painting in favor of sculpture early on in his career. His atelier was located at l’Impasse du Moulin Joly in Paris.
In the mid-nineteenth century Isidore Bonheur found a greater market for his work in England. In 1870 he produced a variety of work that was bought by English collectors.
He achieved most successfully with his sculptures of sheep and cattle, cows and bulls and horses, which are among his most renowned works. Bonheur’s animal sculptures were cast by his brother-in-law, Hippolyte Peyrol, one of the premier founders of the time.
The popularity of his sculptures remains high today.

There are no reviews yet.