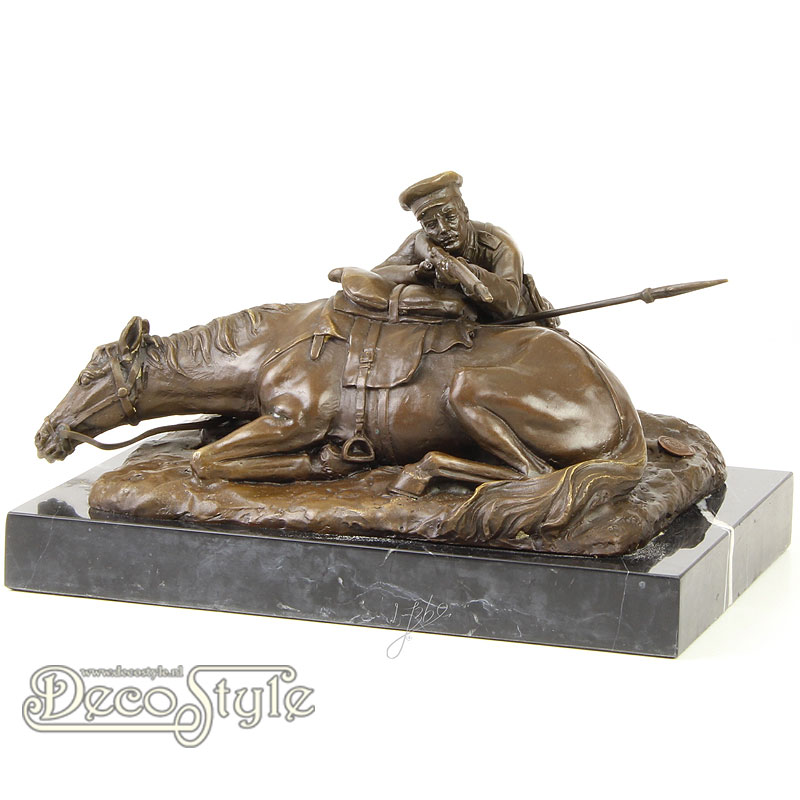 Superb quality genuine hot cast bronze sculpture depicting a WW1 period cavalry soldier crouching behind his horse taking aim with his rifle.
Kazak’s horses have been trained this way, so in a very critical battle moment the soldier could hide himself behind his horse and keep fighting.
Although bearing the signature of Eugene Lanceray this is not an original of his work, it is a modern reimagining.
From the collection Russian Bronze

This sculpture is an original reproduction from oustanding quality. All of the bronze products in our shop are 100% bronze
and each piece is a one of a kind. The sculptures are created in a lost wax bronze casting process and are hand
finished by skilled artists. There are strict quality inspections during the entire process of fabrication.
We do our best to get your orders to you as quickly as possible. We have a large amount of statues on stock and we have close ties to our suppliers, therefore we are able to guarantee a quick delivery on almost every order. Once we’ve shipped your order, package transit time will depend on the shipping option and destination. All orders ship with a tracking number that you can use to monitor the status of your order in transit.

Sculptor. Grandson of Major Paul Lanseré of the Napoleonic army, who was wounded and captured at the Battle of Borodino (1812) and decided to remain in Russia, where he married the daughter of the governor of Vilna. Son of engineer Ludwig Paul Lanseré (1815–1869) and governess Eleonora Yakhimovskaya (1824–1856). Father of Yevgeny Lanceray and Zinaida Serebryakova. Born in the town of Morshansk in Tambov Province (1848), where he studied at the local grammar school. Moved with his family to St Petersburg (1861), where he visited the studios of Hovhannes Aivazovsky and Baron Peter Clodt von Jürgensburg and was awarded a gold watch for a statuette by the future Tsar Alexander III (1866). Studied at the Faculty of Law of St Petersburg University (1864–70). Worked for the Ministry of Finance and studied sculpture independently in the studio of animalier Nikolai Lieberich. Travelled widely across Russia, Bashkiria, Kirghizia, Ukraine and the Caucasus, observing tribesmen and their animals. Sculpted around four hundred works on historical, ethnographic and genre themes. Cast works in bronze using the lost-wax method in foundries owned by Félix Chopin, Adolphe Moran and other Frenchmen in St Petersburg and in iron at foundries at Kasli in the Ural Mountains. Visited France (1867, 1876) and Algeria (1883). Awarded the titles of second-class artist (1869), first-class artist (1872) and honorary fellow of the Imperial Academy of Arts (1876). Married the painter Catherine Benois (1874), daughter of Nicolas Benois. Sculpted the two equestrian statues Fauconnier d’Ivan le Terrible and Chasse au Berkout in the Jardin Biovès in Menton (1876). Died of tuberculosis at his estate of Neskuchnoe (Sans Souci) in Kursk Province (1886). Contributed to exhibitions (from 1869). Contributed to the exhibitions of the Imperial Academy of Arts (from 1869), Pan-Russian Exhibitions in Moscow (1870, 1882), international exhibitions in London (1872), Vienna (1873), Philadelphia (1876), Paris (1878) and Antwerp (1885) and a joint retrospective with Arthur Aubert at the Society for the Encouragement of the Arts in St Petersburg (1886).

2 reviews for Bronze Sculpture – WW1 Kozak with Rifle and Horse