View cart “BRONZE SCULPTURE OF 2 KISSING MEN” has been added to your cart. 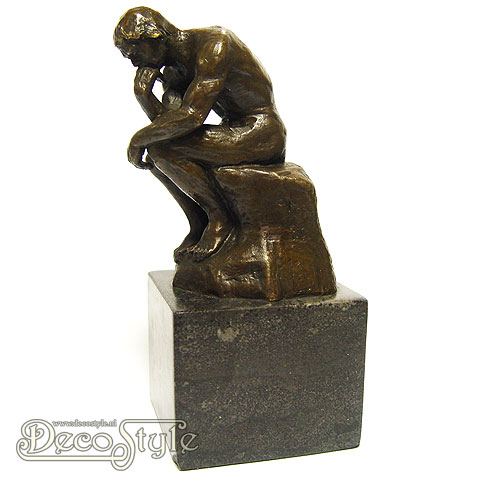 “The Thinker” is a very impressive Modern Art sculpture on marble-base and was designed by the famous french artist Auguste Rodin. The sculpture is signed like the original. The thinker is one of the most wellknown and most popular sculptures in the world. It’s part of the composition
“The Gates of Hell”, a portal for Paris’planned Museum of Decorative Arts. Many of Rodin’s best-known sculptures started as designs of figures for this composition. The famous thinker is deep in thought, he is naked and cups his chin in his hand, a typical thinking pose of Modern Art.
The original was 700 mm high (27.5 inch), designed for the gates lintel, from which the figure would glaze down upon Hell.
The scuplture characterizes Dante, aspects of the biblical Adam, the mythological Prometheus and Rodin himself.
This sculpture is a focal point in every exhibition and an absolute eye-catcher in every invironment.

This statue is an original reproduction from oustanding quality. All of the bronze products in our shop are 100% bronze
and each piece is a one of a kind. The sculptures are created in a lost wax bronze casting process and are hand
finished by skilled artists. There are strict quality inspections during the entire process of fabrication.

We do our best to get your orders to you as quickly as possible. We have a large amount of statues on stock and we have close ties to our suppliers, therefore we are able to guarantee a quick delivery on almost every order. Once we’ve shipped your order, package transit time will depend on the shipping option and destination. All orders ship with a tracking number that you can use to monitor the status of your order in transit.

French sculptor Auguste Rodin is known for creating several iconic works, including “The Age of Bronze,” “The Thinker,”
“The Kiss” and “The Burghers of Calais.”

“Nothing is a waste of time if you use the experience wisely.”
Auguste Rodin
Synopsis

Auguste Rodin, born in Paris on November 12, 1840, was a famous sculptor known for creating “The Age of Bronze,” “The Gates of Hell” and
“The Burghers of Calais,” and several other works. Rodin didn’t establish his distinct artistic style or a credible list of works until he was
in his 40s. Despite becoming a talented artist by his late teens, several years without validation or encouragement caused Rodin enter
a different career. He worked as a decorative bricklayer for nearly two decades, from the late 1850s to late 1870s,
when a trip to Italy provided inspiration. Soon after returning to Paris, he sculpted his first piece, “The Vanquished”
(“The Age of Bronze”), which was exhibited in 1878. Among Rodin’s most famous works is “The Gates of Hell,
“a monument of various sculpted figures, including “The Thinker” (1880) and “The Kiss” (1886).
Rodin didn’t live to finish the huge piece; he died on November 17, 1917, in Meudon, France.

Early Life
Auguste Rodin was born François-Auguste-René Rodin on November 12, 1840, in Paris, France, to father
Jean-Baptiste Rodin and mother Marie Cheffer. He had one sister, Maria.
At young age Rodin was greatly distressed. Between ages 14 and 17 he attended the Petite École, a school specializing in art and mathematics,
There he was unable to see figures drawn on the blackboard and struggled to follow complicated lessons written on the blackboard.
Unaware of his imperfect eyesight, Rodin found comfort in drawing pictures. He could see the drawingpaper infront of him because he was
nearsighted.
In 1857 he tried to win entrance to the Grand ecole. He didnot succeed and the young artist began to doubt himself, receiving little validation
or encouragement and he started to earn a living as a decorative bricklayer and ornamenter.

Adulthood
On the age of 24 he met a young seamstress named Rose Beuret and he stayed with her for the rest of his live. They had one son,
Auguste-Eugene Beuret. In 1864 he offered his first sculpture for exhibition and started working as chief assistant in Albert-Ernest
carrier-Belleuse’s studio. He was a successful mass producer of objets d’art. Rodin workes with him until 1870. they designed roof decorations
and staircase and doorway embellishments. They went to Belgium and workes on ornamentation for Brussel’s bourse.
He stayed in Belgium for 6 years. Having saved enough money to travel, Rodin visited Italy in 1875 for two months. There he got interested in
the work of Donatello and Michelangelo and got inspired to design and create new kinds of art.
As he returned to Belgium he started with ‘The Age of Bronze”, a life-size male sculpture of a nude man, an expression of suffering and hope
for the future.
With this He earned some recognition as a sculptor. This sculpture was first exhibited in 1878. it brought Rodin attention, but also led to
accusations of sculptural cheating.
In 1880 he won a commission to create an entrance piece for a planned museum of decorative arts. Rodin dedicated many of the next 40 years
to this ‘The Gates of Hell’, an unfinished portal for a museum that was never built. Many of the portal’s figures became famous sculptures
in themselves. The most famous ones are ‘The thinker’ and ‘The Kiss’. With the museum commission and private commissions he became artistic
indepedence.

Works
He created thousands of busts, figures and sculpture fragments over more then 5 decades. He painted in oils and in watercolours.

1864: The first sculpture for exhibition was ‘The man with the broken nose”
1877: ‘The Age of Bronze’
1878: ‘St.John the Baptist Preaching’
After these sculptures Rodin had achieved a new degree of fame. Students praised his work and the artstic community knew his name.
1884: a Sculpture that commemorate the six townpeople of Calais who offered their lives to save their fellow citizens during the Hundred years
war between France and England (1337-1453)

America
He came t know sarah Tyson Hallowell, a curator from Chicago who visited Paris to arrange exhibitions in America. She gave him the opportunity
to send a number of works for her loan exhibition of French art. Rodin send Hallowell 3 nudes. They became part of an American collection but
hidden behind a drape and only shown with special
But, he was noticed because of some other works in the official french pavillion at the fair. He didn’t sell the nudes, but purchased two large
marbles for the Chicago manse, financed by Charles Yerkes. He was the first American to own a Rodin sculpture and many other collectors followed
including Potter Palmers of Chicago and Isabella Stewart Gardner of Boston.

Great Britain
Rodin first visited England in 1881. The artist Alphonse Legros intorduced him to the poet William Ernest Henley. Through him he met more
Britisch artists, students and high society and encouraged by enthusiasm for his art, Rodin donated in 1914
a significant selection of his works to England.

Rodin was elected president of the International Society of Painters, Sculptors and Engravers in 1903.
During his later creative years his wordk turnes toward the female form.
He married Rose Beuret in 1917, after 53 years of relationship. He died two weeks later, age 77.
A cast of the “The Thinker” was placed next to his tomb in Meudon.

Legacy
Rodin didn’t finish “The Gates of Hell”. He was still working on the piece when he died.
He is widely regarded as the pioneer of modern sculpture; his work continues to be studied and deeply admired by many many peolple.
Rodin’s sculptures are represented in many public and private collections.
At hotel Biron is the Musee Rodin, founded in 1916. It holds the largest Rodin collection, with more then 6000 sculptures and 7000 works on paper.

There are no reviews yet.